If you are trying to figure out which Smith banjo you own, here is what I can tell you. The Northampton and Maple Leaf models were consistent in their tone systems and variable in their woods and appointments. But when it comes to the internal resonator Shelburne, model designations are not necessarily predictable in terms of whether you have a l,ll,lll,lV or professional. The appointments, especially the inlays changed frequently over the 9 years that we made banjos.

Before I detail the models however, I would like to discuss wood. We used maple, cherry, and mahogany, but produced a few Northamptons in walnut and made at least one repro instrument with holly, I think an Orpheum copy which would have been consistent with the Orpheum #3.

Fingerboards and peg heads were ebony in the Maple Leafs and Shelburnes. Brazilian rosewood was used mainly in the Northamptons until it got too expensive; in the later 1970’s we used a substitute rosewood called wenge.

Any of the above models could have fancy marquetry on the rim and colored veneers in the laminated necks or under the fingerboards and peg heads. We hand-dyed maple veneer either red or green, and used on occasion ebony or rosewood plain maple veneers as well.

In my research for this project I found a newspaper clipping saying that we were paying $3 per board foot for kiln-dried Brazilian off the docks on Long Island from Marshall’s- a price which is literally incredible compared to today’s prices of hundreds of dollars per set of guitar wood.

Maple and cherry were purchased from local saw mills; we had standing requests in with local loggers to call us if they got nice figured maple. Once we found a standing black cherry tree in Colrain, Mass., about 2 feet in diameter, going up 40 feet without a branch. We had it cut and made many instruments out of that fine tree.

Banjo hardware was purchased from Stewart MacDonald, though when we could find them we bought nickel hex head shoe screws from specialty hardware stores. Our tone system brass including the 1/4” round brass (used singley in the Northamptons, and inside the spun brass tone ring of the Maple Leafs and Shelburnes) and 1/8” x 3/8  rectangular brass (also used inside the spun brass Maple Leaf and Shelburne tone systems) were bought by the foot from hardware stores. The spun tone rings were made by Jud Stone, who worked at the University of Massachusetts, and moonlighted for us at his lathe. Hand-spun from sheet brass, we had them nickel plated. Finding reliable platers was always a challenge. 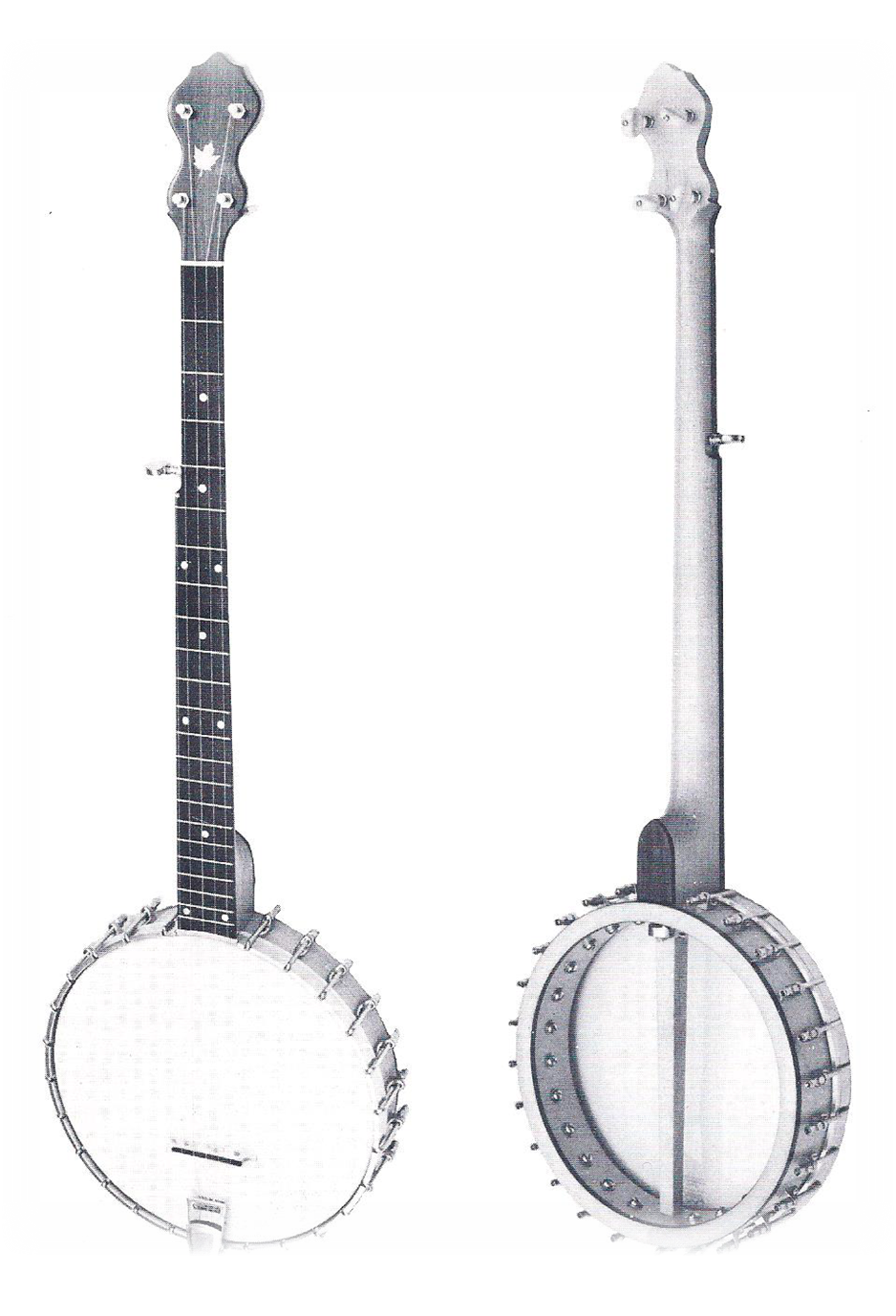 Northampton
With its 1/8” brass tone ring and pearl maple leaf in the peg head, this was the most consistent of our banjos. Could be any wood and have a one, three, or five piece neck with colored or plain laminations, with or without marketry.

Maple Leaf
3 piece tone system, one spun brass with two brass inserts, one round and one rectangular. For the neck, same as for the Northampton. 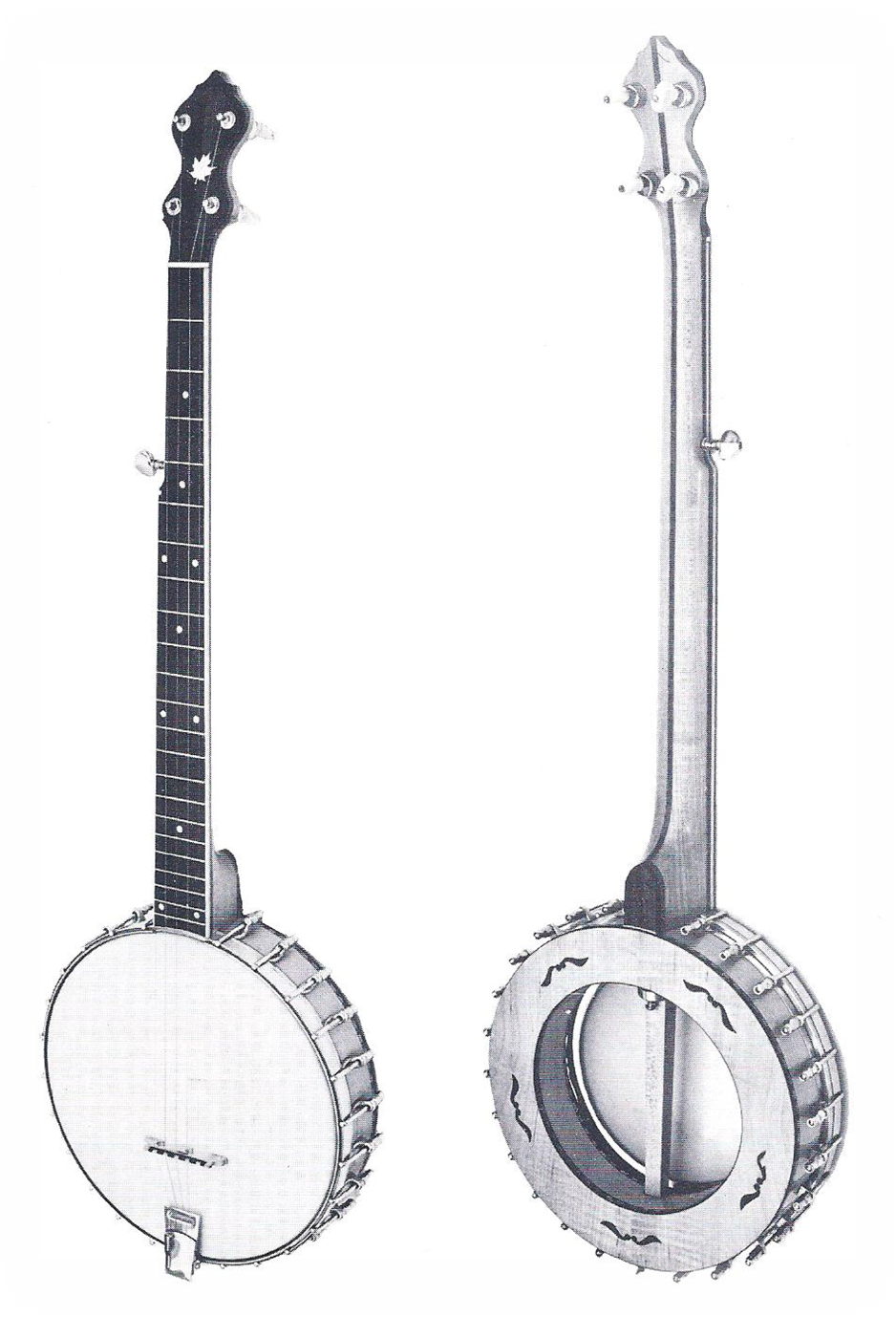 Shelburne I
This was the simplest, with dots and a maple leaf in the head stock. 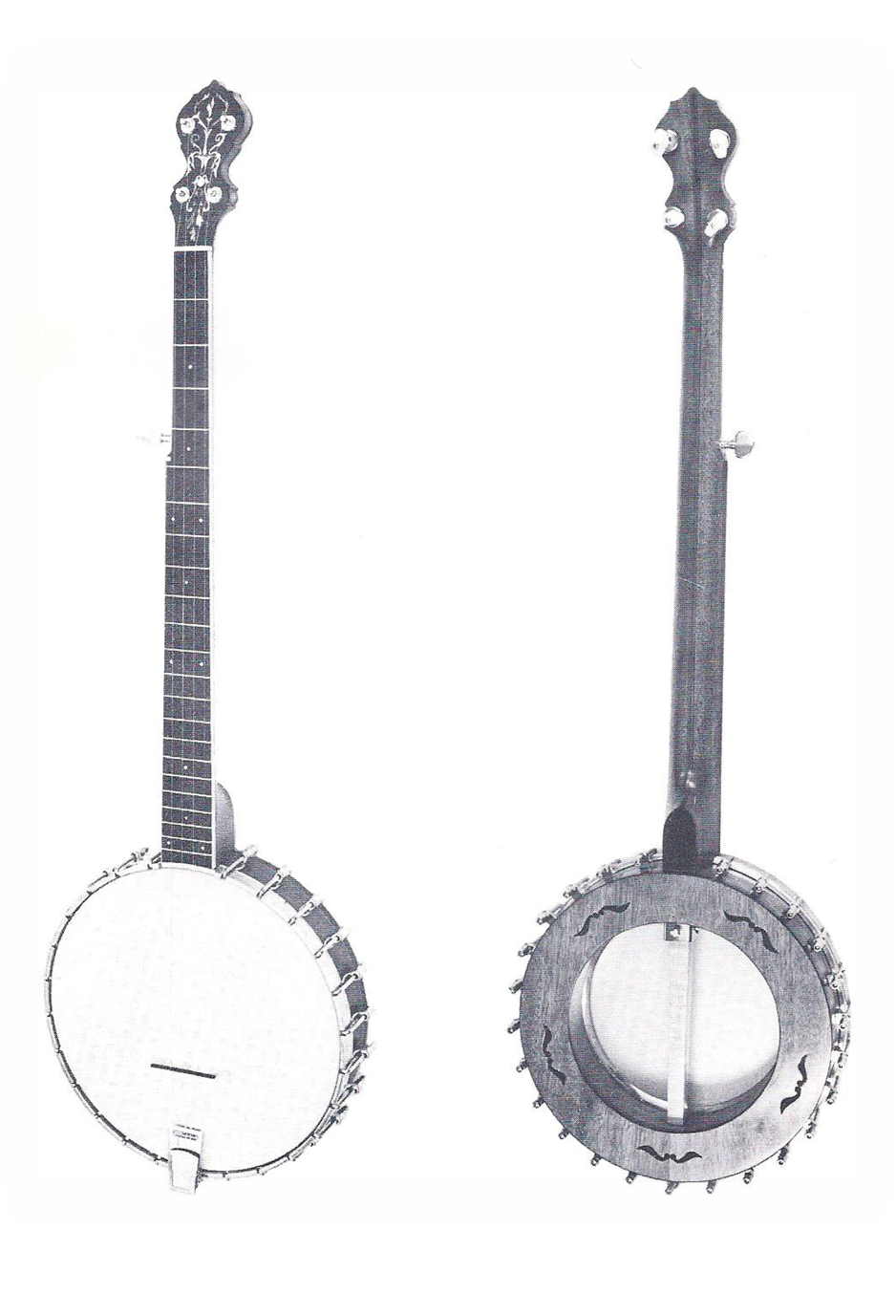 Shelburne II
fancy head stock and dots in the fret board.

Shelburne III
Plain fret board (dots) and a back strap. 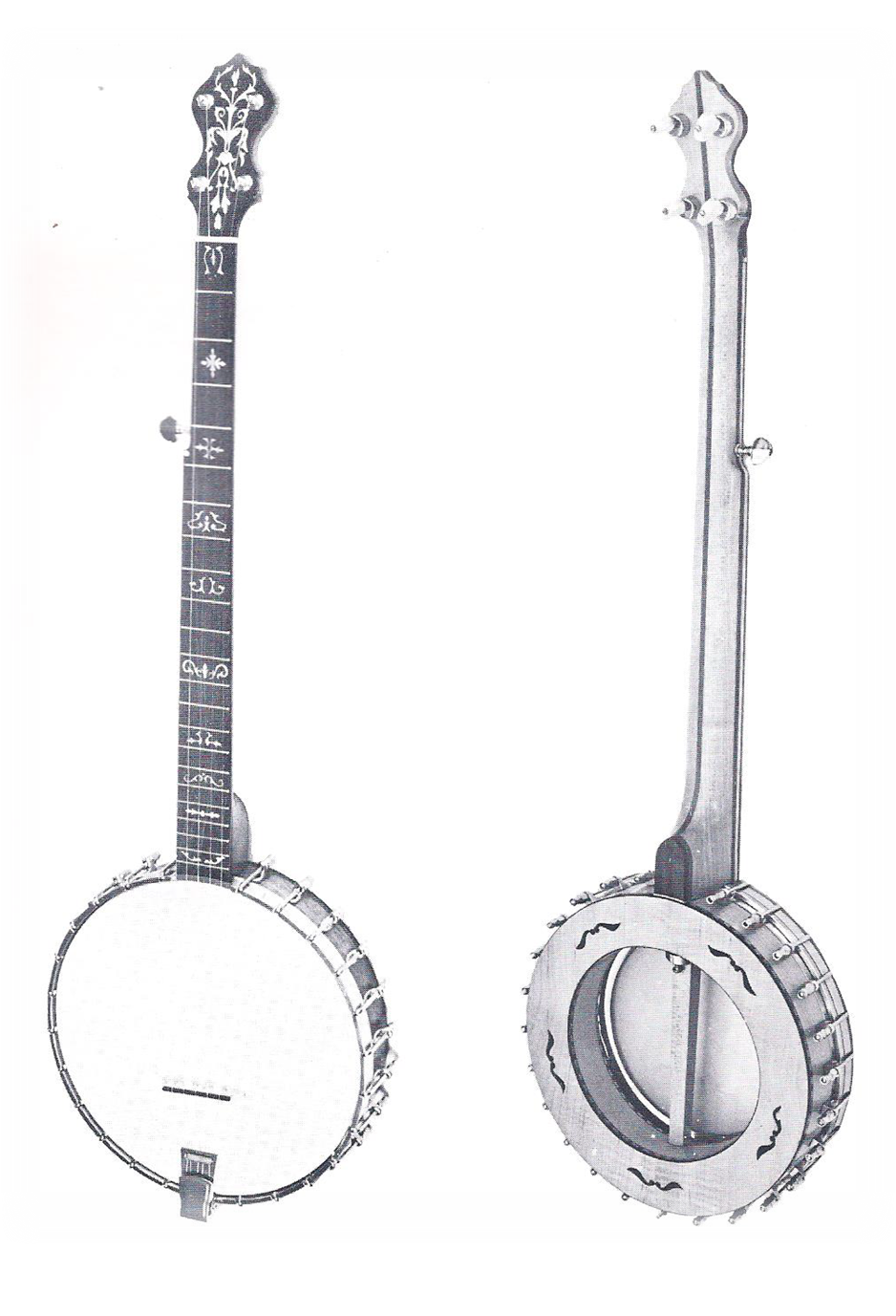 Shelburne IV
Fancy inlay in both head stock and fret board. 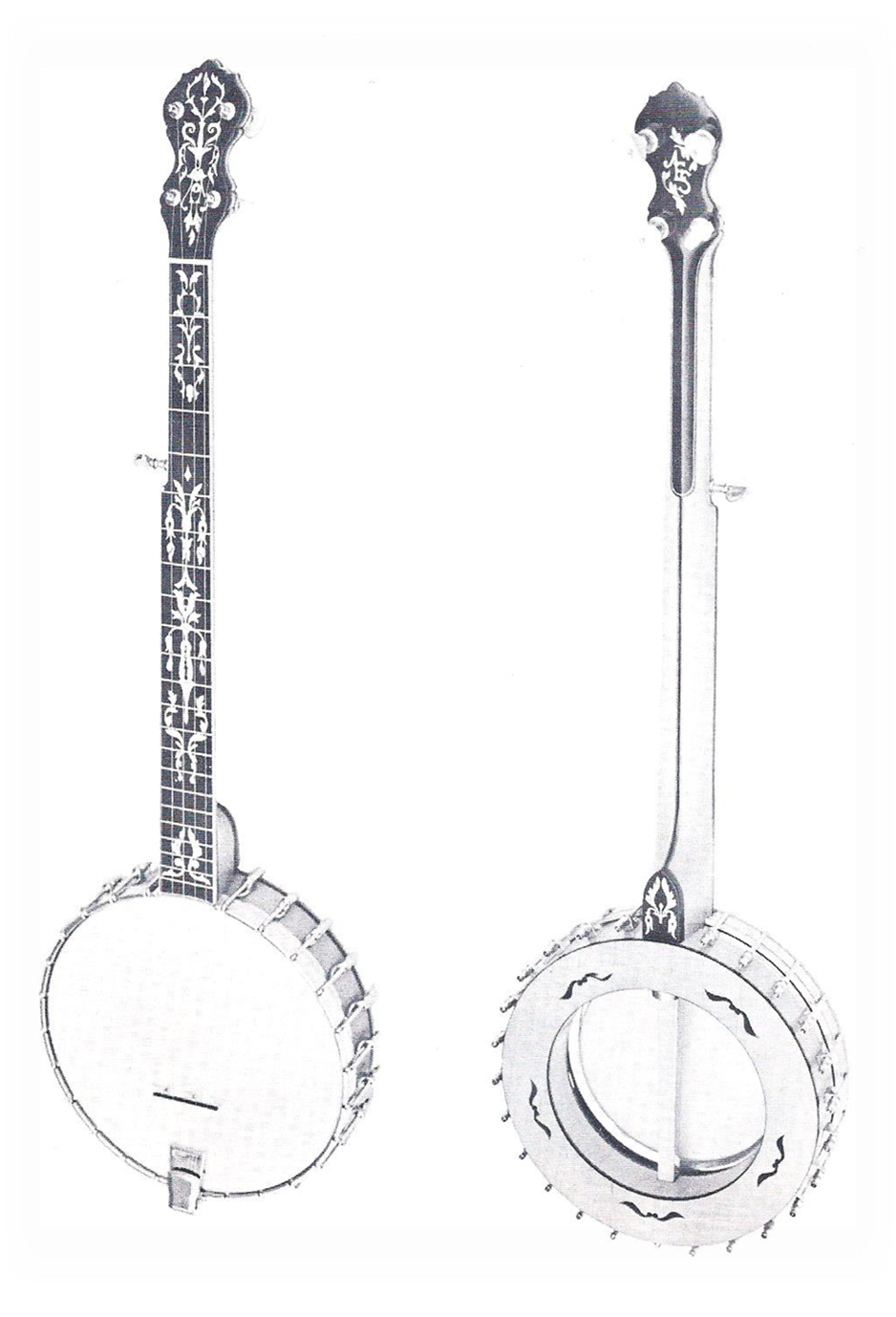 Shelburne Pro
The works with fretboard and peg head inlay and usually inlay in the back strap and heel cap.